I’m back again! If I keep this up, I might end up blogging every day! I don’t think so though LOL

If you’ve followed my ramblings over the  years, y’all should know by now that I associate nearly everything with music. People, places, events, etc. I do the same thing when I write. Usually I just let my playlist roll through songs while I write, but with the second book in the Caressed by Starlight serial, there’s one song I actually didn’t listen to much because it isn’t in my playlist. I would hear it in the car. A lot. As in nearly every time I would get in the car and it happened almost exclusively while I was writing Adding Tyn.

Each time I heard it, it made me think of Tyn-Hy the Cold. As with most books I write, I start out with an idea of what my characters are like and let them show me who they really are. That’s what happened with Adding Tyn. I thought I knew who this cyborg was. I didn’t know the half of it! He was a lot more complex than I intended, with an internal struggle that broke my heart for him and for the target of his desires, En’Daria.

So today I’m going to share the song that I would swear Three Days Grace wrote for him, it’s that perfect for the story. 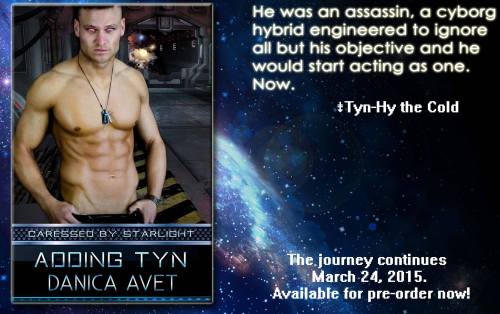 Well, I’m back to writing. I’ve tried again and again all week to get the start of the latest WIP at the right place with no luck. So this morning, I cranked on the coffee, fired up my laptop and downloaded some new songs to help motivate me.

This is what I came up with. I saw these guys in concert last year and I wasn’t really a big fan until I saw them live. I wouldn’t say I’m a huge fan now, but they have a lot of energy and this album is pretty damn good.

And really, the lyrics are speaking to me for this WIP:

“Tonight I start the fire,
Tonight I break away.

I don’t know how many of you are rock concert goers, but if you’ve ever been to one (no matter which sub-genre of rock: metal, alternative, pop), there’s always one person in the crowd who’s undeniably much older than the rest of the crowd. I love going to concerts. There’s nothing quite like seeing a band live and losing yourself in the energy of the crowd.

Last night I attended a concert for Flyleaf, Breaking Benjamin, and Three Days Grace. Now, this isn’t my usual concert fare. I like my music heavier and louder with mosh pits popping up all over the place. Last year I saw Shinedown and was disappointed, but I have to say that this concert didn’t give me the same feeling.

So, let me start by saying that we spent more time looking for the correct line than we did waiting in it. After walking around and around the arena, we finally found the line we needed and managed to get in the building.

Flyleaf…This isn’t a band I know much about. I like a few of their songs, but because I have this strange dislike of bands with female singers, I didn’t enjoy them that much. The music was good, but the vocals had too much echo to truly understand.

Breaking Benjamin…I happen to like this band a lot. They were very good live. There was no need for them to get the crowd pumped up, because everyone was digging it. They did an amazing tribute to deceased musicians to the tune of Dream On (Aerosmith) while flashing pictures of these musical legends. I’d definitely see them again.

Three Days Grace…Again, this is a band I know a few of their songs, but not all that many. They were good, although I could’ve done without the lead singer harassing the crowd to get them pumped up (but that’s just me). They had pyrotechnics and we were sitting close enough that I began to worry if they were trying to serve up BBQ Cajun for the after party. I don’t know if I’d go to see them again, but if they were part of a line-up, I wouldn’t protest too much.

This brings me to the title of today’s post. I’m 33, not quite at the age when I’m much older than the rest of the concert goers, but I have heard that I will end up being THAT person. My question is, at what age do you become that person? In your 40’s? 50’s? I don’t think I’ll be jonesing to get into a mosh pit at 40 or older, but you never know.

What do you think? Is there an age where you have to say, “No more concerts”? Or would it be cool for an 80-year-old to rock out at a Slipknot concert? (Of course, they’d be in their 80’s too, so maybe it would be awesome…a bunch of senior citizens on their rascals pretending to mosh…)