***UPDATE: The winner of the What is Danica thinking giveaway is…TABATHA DERBY. Congrats Tabatha and thanks everyone who entered. Don’t forget there are two other giveaways going on for the rest of the week!

Yes, you got it. This week I have the newest of the Ellora’s Cave cover models, Caveman Austin. We all love our Cavemen…we can’t help it. They’re just so much fun and RomantiCon and other events, not to mention, sexy.

Danica: How did you become a cover model/dancer?
Austin: I was working as a server in a restaurant but really wanted to do something a little bit more fun so I decided to look into male dancing. I googled it and sent an email out with my picture, and they invited me up to the club on a Thursday night to check it out. Everyone was so nice I knew I wanted to be a part of it. Several guys took me under their wing and showed me the ropes and that’s how it all got started.

Danica: What’s the one place in the world you’d love to visit and why?
Austin: I would love to visit Norway. We had a foreign exchange student at the high school I went to and we became good friends. I think she convinced me on the idea that it would be wonderful just to experience.

Danica: What do you have going on right now? Do you have any upcoming appearances?
Austin: Right now I’ve just been taking it easy and getting ready to start training for summer.

Danica: What do you think is your best feature?
Austin: I think my eyes but girls tell me its my butt so who really knows?
Danica: I can totally judge that for you…

Danica: Are you a breast or a butt man?
Austin: I like proportion so I find it hard to appreciate one if the other isn’t balanced. But probably butt all the same.

Danica: What’s one thing about yourself you feel enough people don’t know?
Austin: I feel like people misjudge my introverted moods as conceitedness when in reality they’re just me inside my own head. 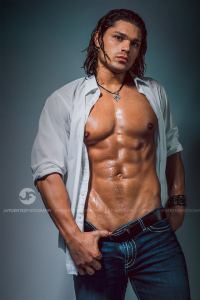 Danica: What’s your favorite position?
Austin: This depends on the girl but I like it when a girl has the confidence to get on top and not be shy.

Danica: Do you prefer winter or summer?
Austin: Summer

Danica: What’s one movie you can watch over and over?
Austin: The Avengers

Danica: Do you prefer mountains or beaches?
Austin: Mountains