I’m back again! If I keep this up, I might end up blogging every day! I don’t think so though LOL

If you’ve followed my ramblings over the  years, y’all should know by now that I associate nearly everything with music. People, places, events, etc. I do the same thing when I write. Usually I just let my playlist roll through songs while I write, but with the second book in the Caressed by Starlight serial, there’s one song I actually didn’t listen to much because it isn’t in my playlist. I would hear it in the car. A lot. As in nearly every time I would get in the car and it happened almost exclusively while I was writing Adding Tyn.

Each time I heard it, it made me think of Tyn-Hy the Cold. As with most books I write, I start out with an idea of what my characters are like and let them show me who they really are. That’s what happened with Adding Tyn. I thought I knew who this cyborg was. I didn’t know the half of it! He was a lot more complex than I intended, with an internal struggle that broke my heart for him and for the target of his desires, En’Daria.

So today I’m going to share the song that I would swear Three Days Grace wrote for him, it’s that perfect for the story.

What item, or items, is absolutely necessary to your writing mojo? A favorite pen? Devil horns on a headband?

Cara: My computer. LOL. I write on a laptop, but I have a separate keyboard and wireless mouse that I must have. And I need a notebook to jot things down. In winter, I often wear fingerless gloves because my hands get cold. But I don’t have a special talisman to create a magical mojo.

Cynthia: Nutella! Cynthia Sax runs on this chocolate hazelnut goodness. One of these days, I’ll organize a huge Nutella-sponsored writer-reader world tour. We’ll go on the road, eating Nutella straight out of the jar, talking about books and creating havoc wherever we stop. That’s the dream!

Other than Nutella, I have no rituals. I’ll change anything and everything to coax the muse out of hiding. If a story isn’t working on the screen, I’ll handwrite a few scenes. If the handwriting in blue isn’t working, I’ll write in hot pink. I’ll turn on or off music, listen to country, rock, opera, rap.

A.M. Griffin: None. I used to play with one of my son’s toys while I wrote. It had a calming effect. But as you know, if I had it then he had to have it. I gave up on that. I do like to sit on my bed and write. I’ve tried to go to other parts of the house to write, but I found that it’s either too noisy or distracting, especially if there are messes to clean.

Lolita: I need music and soda—and that’s about it. Well. Okay. Sometimes, especially when I’m writing late at night, I like to wear my purple house robe. I basically shuffle around the house looking like The Dude—but no white Russians here. :0  I’m strictly a teetotaling soda girl!  (And that’s a Big Lebowski reference, for those not in the know!)

I’m just your everyday dirty-book-writing mama. I live in Texas with my Viking throwback husband and a mischievous preschooler. You can find me online at www.lolitalopez.com and on Facebook (goo.gl/UsNFM). My newsletter (eepurl.com/mlTcX) provides updates on new releases, free reads and other cool stuff.

I also write scorching hot romances with a dash of suspense and plenty of sexy tattooed bad boys as Roxie Rivera(www.roxierivera.com) including the bestselling Her Russian Protector series and the Fighting Connollys trilogy.

To escape her father’s debt to a loan shark, Dizzy seeks refuge in the upcoming Grab. She’d rather belong to one of those terrifying sky warriors from the battleship Valiant than to the sleazy criminal who wants her as his plaything.

The years of constant war haven’t been kind to highly decorated sniper Venom. Only the promise of earning a wife kept him going through deadly battles. Catching and collaring Dizzy fills him with incredible hope. Finally he has a woman of his own, a mate to love—and bind and adorn with his ropes.

After a brazen Splinter attack, the Shadow Force uncovers secrets about Dizzy’s late mother that entangle her in a web of deceit. To save Venom, her father and an operative named Terror, Dizzy digs deep and risks it all.

Venom refuses to stand idly by while Dizzy’s haunted past threatens the future they’re trying to build. He finally has a reason for living—and he’s not giving her up. 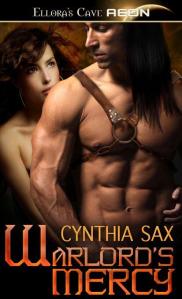 Cynthia Sax lives in a world where demons aren’t all bad, angels aren’t all good, and magic happens every single day. Although her heroes may not always say, “I love you”, they will do anything for the women they love. They live passionately. They fight fiercely. They love the same women forever.

Cynthia has loved the same wonderful man forever. Her supportive hubby offers himself up to the joys and pains of research, while they travel the world together, meeting fascinating people and finding inspiration in exotic places such as Istanbul, Bali, and Chicago.

Website
Blog
Facebook
Twitter:  @CynthiaSax
Amazon
Blurb:
Tolui, a clone of a powerful Warlord, is a male without a homeland or a future. Doomed to never mate, he ruthlessly wages war, seeking to give his clone brothers a planet system to call their own, a place where they can live without persecution.

When Tolui crashes on a deserted planet and meets a small human female, he discovers everything he knows about clones is a lie. Lea, his destined mate, frees the passion he’s suppressed over his lifetime. He wants her. He needs her. He’ll do anything to bond with her.

But he won’t share her. Tolui’s greatest battle will be the fight for Lea’s heart. To win her love, he’ll face hundreds of his clone
brothers, men who look exactly like him.

A. M. Griffin is a wife who rarely cooks, mother of three, dog owner (and sometimes dog owned), a daughter, sister, aunt and friend. She’s a hard worker whose two favorite outlets are reading and writing. She enjoys reading everything from mystery novels to historical romances and of course fantasy romance. She is a believer in the unbelievable, open to all possibilities from mermaids in our oceans and seas, angels in the skies and intelligent life forms in distant galaxies.

Jess hates aliens. After the invasion that destroyed Earth, the extraterrestrial bastards sold her to a brothel as a sex slave. She may have escaped but the old memories and fears still linger in the dark corners of her mind. Supposedly Sonis is just the place for her—somewhere safe, where she can heal and start fresh. She’s almost hopeful…until she meets Rasha, her new boss.

Rasha, captain of the Sonis Royal Guard, is a warrior through and through. He’s huge, sinfully sexy and could have any woman on Sonis—but the woman he wants is Jess. He’s very much an alien and Jess knows she should hate him or at least be wary, but whenever he’s around, she loses control. She tells herself it’s only sex—amazing, mind-blowing sex like nothing else she’s ever experienced—but there’s something about Rasha that shakes her soul. The feel of his skin against hers, the look in his eyes as he touches her—they make her want to believe it’s possible to find love and begin again.

To secure his legacy, Commander Dak, a ruling Alpha of planet Parseon, purchases Omra, a breeder slave. He intends to impregnate her, produce a son, and hand her off to his anointed beta partner. As Dak and Omra discover a sexual bliss banned by law, he begins to question the traditions and ways of his people, causing him to jeopardize his command and endanger the life of the woman he has come to love.