Spotlight on Brought to His Knees

I’m being completely biased when I say how awesome this 11 story box set is. I know I am, but I can’t help it. I was able to work with 10 talented authors and we created a set of hot stories of Alpha men laid low by love. What more can you ask for? I know what, a giveaway. Because giveaways rock, right?

Which authors are participating in this giveaway, you ask? Well, only the best, that’s who! 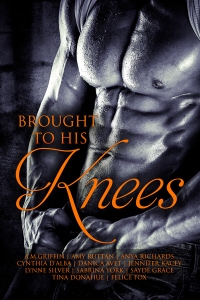 The Alpha male. Strong. In control. Letting no one and nothing rule him…until he meets the one, and all bets are off. The world tilts, the bed rocks, and suddenly that tough guy finds himself Brought to His Knees–in more ways than one.

A.M. Griffin ~ Dark Wolf Enterprises ~ Murder, mayhem and imprinting with a hot wolf shifter… And they say being an accountant is boring.

Amy Ruttan ~ Building Bridges ~ A vet tech and a lone wolf rancher ride out a sudden storm, but can they weather the emotions they stir up in each other…

Anya Richards ~ Three Strikes ~ Two lonely men. One secret affair. Irresistible passion that will push them both to the breaking point, and beyond.

Cynthia D’Alba ~ A Cowboy’s Seduction ~ One exhausted cowboy + One uptight account x A tropical resort = A hot seduction. But who is seducing whom?

Danica Avet ~ Born To Sin ~ A tomboy in love makes a desperate attempt to seduce her best friend and succeeds beyond her wildest dreams. But this Alpha male isn’t easily tamed and has secrets that could very well tear them apart.

Jennifer Kacey ~ Beneath The Pages ~ One wicked night with her did nothing but whet his appetite. Now he’ll settle for nothing less than her complete submission.

Sabrina York ~ Whipped ~ A scalding attraction. An irresistible passion. A pity she’s the one woman he can never have…

Sayde Grace ~ Chief Sin ~ A taste of Sin isn’t enough. Instead she wants all of him, including the heart she once broke.

Tina Donahue ~ Make Me Surrender ~ When it comes to two of the hottest guys in town, she has a proposition…to win their attention, passion, hearts.

So many amazing short stories for only 0.99 at all of these retailers
Amazon
B&N
ARe
Smashwords

Um, so it feels like forever since I blogged. For some reason, I just can’t seem to come up with anything interesting to write about in terms of me.

Are y’all still here? If so, thank you so much! How’s life been treating y’all?

You know how things just sort of go crazy. You have a set plan in place, a goal in mind that you’re bound and determined to follow and then BLAM! fate throws you a curveball? That’s what it’s been like for me. After the release of Touched by Lightning, I’ve been dodging curveball after curveball. That doesn’t mean I haven’t been ogling sexy men over on Facebook because y’all know that’ll happen no matter what.

But for about three months my creative energy was gone. Oh I tried to write, tried to pretend I was going to have a story finished by April and another finished in May. I even had a spreadsheet with all of my ideas and schedules planned out. Then real life intruded, bold and brash, bullying my muse. Between the EDJ and family crises, my muse was whimpering like a whipped puppy.

Things aren’t better, but they aren’t worse either. I’m starting to finally (slowly) get a handle on things. None of those things that’ve been holding me back have gone away. If anything, they’ve gone from schoolyard bullies to massive giants stomping all over everything, but my muse is fighting back. She wants to write stories with happy endings (and not just of the sexual kind heh). She wants to exert a little control over something even if it’s an imaginary world.

So saying that, I’ve just finished a short story for an upcoming box set called Brought to His Knees. I’m going into this awesome undertaking with ten other authors: A.M. Griffin, Amy Ruttan, Anya Richard, Sabrina York, Sayde Grace, Jennifer Kacey, Felice Fox, Cynthia d’Alba, Tina Donahue and Lynne Silver. I have to say, it’s pretty amazing what eleven determined authors can accomplish and I really think this box set will have something for everyone’s tastes. My contribution to this set is the next story in my Southern Sin series. Don’t worry, we’ll be having a huge book cover reveal and prizes and… you know what? How about y’all follow our Facebook page to find out what’s going on next? We’re having takeovers, giveaways, you name it and we have it 😉

Brought To His Knees

And starting soon, possibly even today (shocker!) I plan to start a series that’s been driving me insane for the last two months. Maybe it has to do with all of the stress that’s built up since January, but I’m going dark and grim with this new series. Oh don’t worry, I still plan to write my shifters in the Cajun Heat series and stories in my Grand Terre world, but a writer’s got to write where the muse allows her, right? 😉

I’m going to try a lot harder to blog more often, but I’m not promising anything because when I do… 😉

So how about y’all? How has everyone been?