I don’t have a fantasy man interview today. Sorry. The menz are not working with me lately, but that’s okay. It’s exhausting trying to keep up with all of them. Really. Maybe once I’ve recuperated and had time to I mean, discover new muscled men who like do bare it all, I’ll bring the friday interviews back.

But I’m not leaving y’all hanging. Nope, I have some awesomeness to share. Like the cover of my upcoming release, Primal Flavor (Book 3 in the Cajun Heat series). This one is about the tiger shifting chef, Zachary Trahan, and his  human huntress, Colette Robicheaux. No blurb yet, but I’ll just say that it’s spicy. And not just because Zach is one hell of a chef. Things happen that probably aren’t coded to happen on kitchen tables and sofas. But I’m not saying what they are.

So please, enjoy the long-awaited cover for Primal Flavor. I’ll be over here drooling over it. Because yeah, it’s a hot cover. It could almost be a fantasy Friday picture, don’t you think? 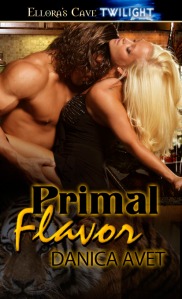