Ohmmm. I’m not sure what I’m in the mood for today. I must’ve blown a circuit or something on Saturday with my big writing day because ever since I’ve been dragging ass. I want to sleep. In fact, sleep is like the sexiest thing in the world to me right now. Like, if Gerard Butler, M. Shadows or Vin Diesel were to say, “Danica, would you like to come with me to my secret hideaway and so I can shower you with more pleasure than you could possibly handle?”

My response would be, “Eh, is there a comfy bed?”

Okay, maybe not. Cause those men are sexy! I’d probably latch onto them like Velcro and never let them go. “But we can be together forever! Oh look, it’s Vin/M. Shadows/Gerard.” (Because I can be fickle.)

Anyway, sleep sounds delicious. Except I keep having weird dreams. I suppose with RomantiCon coming up, my brain is trying to get me ready for it or something because I’ve had several dreams about the conference, or a conference, then more recently I’ve dreamed about doing squats. I’m talking about a gazillion squats. Is it any wonder I’m so tired when I wake up? I’m working out in my dreams!

So yeah, we need some music about dreams or sleeping or something. *thinks* Several songs came to mind, but they were all slow and depressing. So I chose this:

I do enjoy Stone Sour. A lot. And the title is fitting, isn’t it?

Hope y’all are sleeping more than I am!

I’ll probably get a lot of traffic today just because I used the word fetish in the title of this post. I don’t have that kind of fetish like that guy who literally loves his cars. To each his own and all that, but I actually like to look at cars, drive cars and dream about them in an “If I could afford it…” kind of way.

I don’t drive an expensive car. Hello? I’m a poor writer working a day job to keep her in conferences. But one day I figure that might change. Like when everyone was running to the store to buy a lottery ticket, I was in line spending my millions just like everyone else. What would I do with 400 million dollars if I won it/earned it? My family and I like to muse on this topic a lot as well. It’s pretty much decided that if you’re a close blood relation and any of us win a lot of money, we’d probably make sure you’re set for life.

This would be my list of What I’d Do If I Won Hundreds of Millions of Dollars:

Yes, cars. More than one. This is where the title for this post comes from. I love cars. I love to build my dream car. You know what family compound thing? My house would be the smallest on it, but I’d have the biggest garage because I’d have that many cars. I even have a list of cars I’d have to get. Ready? 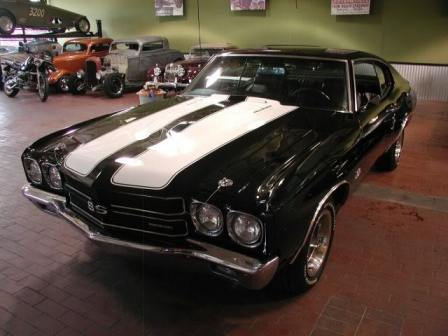 There are some other cars that I’d get. You know, just everyday driving cars, but these would be the ones I’d simply have to own and would refuse to sell even if I became one of those lottery winners who go bankrupt within five years of winning. I’d give everything away except these cars. I’ll be 90 years old and sliding my ass behind the wheel of the Chevelle and revving the engine. Oh yes. And my hair would probably be purple. On purpose.

So what about you? What would you do if you won 400 million dollars?

I know today’s Wednesday which means What’s Playing, but I’m stoked about leaving for Ohio tomorrow. Seriously, y’all. I’ve already left and I’m winging my way…in my head. I still have a day of work, a night of Duck Dynasty and last-minute packing to do, but I’m already enjoying the conference. Except in my dreams. Those are about my nephew’s radioactive incinerator in his apartment because he’s too cheap to pay for trash service. Don’t judge me! It was a dream!

I blame it on a combination of text taunts from him because his fantasy football team beat mine, HAZWOPER training and Chantix. Why couldn’t I dream about the cavemen? Or the plot of the WIP I haven’t touched in days? No, I dream about something like this. Hmph.

Anyway, I’m excited and I haven’t forgotten about October having a black theme for What’s Playing Wednesdays. Today I decided to leap back twenty years…wait, hold up. Twenty years? Seriously? *gets out the calculator* Yeah…1992 was twenty flippin’ years ago. That’s just wrong. I’m not supposed to be this old. I’m on the verge of having a nervous breakdown because I just realized I can remember when this band came out and everyone thought it was so awesome.

White Zombie, you know, Rob Zombie’s first band came out in the early 90s which is blowing my mind. I was in high school and thought I was hot shit. (Pardon my French) But then most teenagers think the same thing, so I’m sure y’all understand. Anyway, I had to get this album and I listened to it all the time. It was hard, wild and a little crazy. But I had no idea that Iggy Pop was in the video until today. That’s just cool.

Anyway, today’s song is Black Sunshine. Now I’ll go back to daydreaming about Ohio while I suffer through another HAZWOPER class. Think of me!

As if y’all didn’t know today was Valentine’s Day. To be honest, I don’t really hold with the whole thing. I figure if you’re in a relationship, you should show your appreciation for your loved one all year long, not on any particular day.

This post isn’t even really about Valentine’s Day or romance. It’s about the weirdest dream I had last night. A lot of you are writers and you’ve attended conferences, so I’m sure y’all have your own nightmares to share and feel free to if you like.

Last night I dreamed I was going to a conference. I don’t remember which one it was, but I think it might have been in Philadelphia. I arrived late, a few minute after five and the registration was closed. The ladies were just picking up and I begged them to let me register, but they were adamant that registration was closed for the entire weekend.

For some reason, I’d given my license, credit cards, and something else to the hotel staff. Maybe to hold my room? But you don’t really do that. Anyway, the only way I could get my personal things back was to have that registration badge and I’d missed the window by a few minutes. I remember being frantic. I was stuck in a strange city with no identification, no money, and no room for the night.

At some point in my dream, I ended up at the Philadelphia Public Transportation Department (if there is one) and begged one of the employees to help me. That’s where the dream ended.

Now, I like to analyze dreams and why we dream them. The conference frenzy is understandable. I have two conferences booked in March. Yesterday I found out that I have to attend a two-day training seminar right before the Silken Sands Conference. That means I’ll be going from Lafayette on Wednesday and Thursday to Pensacola on Friday. It’s going to be a very busy week for me.

The other thing I think that helped me have this dream is a show called Parking Wars. I watched it on Saturday night with my family. For some reason, that show haunted me in my dreams because no one would believe me when I tried to explain that the hotel had my identification and registration was closed when I got there. Yup, it’s the show’s fault.

So what about y’all? Do you have any nightmare stories to share?

My Dream Was Interrupted

Saturday, when I lost the thread of my story, I decided to take a nap. Now normally naps are anywhere from 30 minutes to 2 hours. This is different from my powernaps. Powernaps are taken only during working hours and last maybe 15-20 minutes. Why is this important? Well…

For the most part, I don’t dream when I nap. I have to have a good sleep going to fall into a dream state, but I must have been more tired than I realized Saturday because almost as soon as I fell asleep, I was dreaming. It’s what I was dreaming about that was fascinating. You see, I dreamed I was part of a police investigation in France. I’ve never been to France. Even better, the crime happened on a train. I’ve never been on a train either. And like icing on the cake, the detective interviewing me was this guy:

This is Olivier Martinez. I’m sure those of you who’ve seen Unfaithful recognize him. I didn’t recognize him. I’ve only ever seen him in Blood and Chocolate and that was years ago. So why did he appear in my dream? I haven’t seen any movie previews in a while, I didn’t even know his name to be honest, but there he was in amazing Technicolor.

By the way, he didn’t look like this in my dream. He was more scruffy, broody, and oh so hot. No, no I’m not going into detail about what happened…mostly because he just talked to me in that French accent and brooded at me. It was lovely! It was like being a heroine in my very own romantic suspense. *swoon*

So you can about imagine how disappointed I was when the dream was cut off abruptly. Yup, I woke up. Or rather, I was rudely interrupted by my dog barking at whoever was knocking on the front door. I stumbled out of bed, shuffled through the house and flung the door open. I’m pretty sure I was a scary sight with my hair sticking up all over the place and a baleful glare in my eyes. Luckily it wasn’t Gerard Butler or that cute UPS guy. No, it was my aunt and cousin.

It’s been three days. You’d think I would be over it, but I’m not. My brain keeps sending me flashes of the dream (mostly Mr. Martinez’s face) when I least expect it. I can only suspect it’s because I didn’t have closure in the dream, you know, like solved the crime, caught the suspect, kissed Olivier (cause we’re on a first name basis now that he’s appeared in my dreams), that kind of thing.

Now, my only other complaint is…where exactly is Gerard Butler? Shouldn’t he be the one starring in my dreams? Naughty man. I suppose when he finally shows up, I’ll have to spank him.

Have you had any interrupted dreams lately? What do you usually dream about? Is Gerard showing up in your dreams? Cause if he is, tell him I expect him to be on time tonight.