I wish I could say I found today’s guest on my own, but I didn’t. I discovered him through friends who posted pictures of him on Facebook. I was hesitant about approaching him for an interview, but I’m so very glad I did.

Today’s guest isn’t a caveman although he could very well become one. Nope. He’s  a professional rugby player. Are you dying yet? His name is Stuart Reardon and he made this Cajun girl very happy when he agreed to let me feature him on this blog. I hope you enjoy the interview. Oh and uh, the pictures. *wink*

Danica: What’s the weirdest/funniest/scariest thing you’ve ever seen in your line of work?
Stuart: In Rugby the injuries people sustain when playing…I’ve seen it all shoulder dislocations, Achilles rupture, broken legs, broken arms, the list goes on it’s a very tough sport…nothing so scary with modelling its pretty easy compared to Rugby League.

Danica: What’s one place in the world you’d love to visit?
Stuart: I loved my time in the US. I was in NYC, Miami, but I would love to visit Las Vegas the city that never sleeps…it looks amazing at night and day the whole place looks amazing from casinos to hotels to the lifestyle people live. That’s the place I would really like to visit.

Danica: What do you have going on at the moment?
Stuart: I have just signed for the Crusaders in the UK for the 2013 season…I’m becoming a personal Trainer and setting up my own business….I have a manager, Patrick Corcoran, now so things are going better in modelling…Looking to maybe try my hand at acting school to see if I have what it takes.

Danica: Do you have a nickname? Can you explain how you got it?
Stuart: Ray ray was a nickname I had at Rugby… as well as Rocket as I could run fast.

Danica: How many hours do you spend in the gym?
Stuart: I spend on Average 2 hours a day in the gym….an hour for weights and an hour for cardio…probably more as I’m really addicted to training I always have been from a young age…Its not a bad thing to be addicted too I guess it could be a lot worse lol. I love all kinds of Training, boxing, Muay thai, wrestling, MMA, sport is a massive part of my life… it always has been and always will be.

Danica: What do you think is your best feature?
Stuart: My best feature. I guess that’s a question for other people to answer really, not me lol…I would have to say my face…anybody can have a great body if you work hard and eat healthy…. but its our face that makes us different. 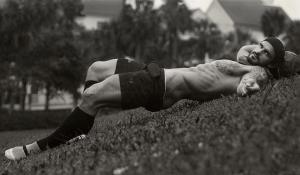 Danica: What kind of woman are you most sexually drawn to?
Stuart: Brunettes with tanned skin are the women I’m most drawn to sexually.

Danica: What’s your favorite kink?
Stuart: What’s my favorite kink? I don’t understand the question. If you mean kinky things I like….. nothing crazy. I like role play…to have my girlfriend dress up sexy for me in outfits.

Danica: Do you have funny/embarrassing moments from a photo shoot?
Stuart: No really crazy things from shoots…I guess it can get pretty embarrassing and funny when you’re shooting in public places but you just get used to it.

Danica: Are you a breast or a butt man?
Stuart: I’m both I like breast and bums can’t really separate them for me…I love a pretty face too. I think a beautiful face will always attract you to a person first…that’s just my opinion. 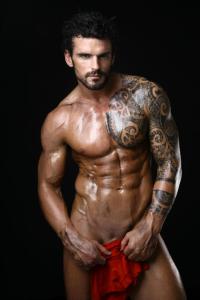 Danica: What’s the craziest thing you’ve ever done as a model?
Stuart: The craziest thing I’ve ever done is probably going to the states on my own for 2 months traveling… meeting so many good people, photographers, the places I saw, I’m really glad I did it but it was not easy on your own.

Danica: What’s your favorite place to take a date?
Stuart: My favourite place would the sapporo Teppanyaki Restaurants. They’re everywhere in the UK. It’s a fun place to go for a meal… good entertainment really great food and drinks all cooked right in front of you…I’ve had some great dates there with Emma, my girlfriend.

Danica: Is there anything about yourself you don’t feel enough people know? Stuart: I’m a good person. People who know me know that….that’s my best quality in my opinion. My personality…I treat people how I would like to be treated…I think if you are like that as a person you won’t go too wrong in life.
Danica: I’d like to send out a very heartfelt thank you to Stuart for taking the time out of his busy schedule to answer my questions.

He won’t be able to stop by for a visit, but I don’t think y’all mind too much, right? However, he has said he’ll be glad to answer questions from his Facebook fans. Just send him a message and he’ll get to you as soon as he can. Be polite, people! LOL