How can a Monday be fun? Well…really, it’s not supposed to be, but today is the release of my newest Crushes to Cravings Tale, Playing Doctor.  It’s not, contrary to belief, about a doctor, but about two people who played together as kids and as nature would have it, became romantically involved until they’re torn apart by cruelty. The story bugged me for weeks until finally I put my big project on the side and worked on it. Then it just flew out of my brain and onto paper. 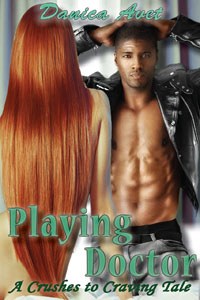 Elijah “Eli” Tucker loved Dixie Champagne from the time they were young only to have his world ripped apart by a betrayal that cut deep. Vowing to have his vengeance on her, he bided his time until she returned to town. It took ten years but seeing her again revives feelings he thought long dead and it takes all of his considerable willpower to exact his revenge. On the woman he still loves even now.

These star-crossed lovers will have to discover the truth of their past to have a future together.

You can pick Playing Doctor (A Crushes to Cravings Tale 2) up at Amazon, ARe and Smashwords.

And that’s not all the excitement going on. The Loving Dangerously Blog Hop is now over and the winner has been picked. I had a giveaway on my blog as well and that winner is… strawberryrosered. I’ve offered up reader’s choice of backlist in this giveaway and Strawberryrosered will get to pick what book she’d like to win. I want to thank everyone who participated in the hop and remind you of the other two hops coming up. Just peek over at the sidebar at the Six-Pack Stud-a-thon Blog hop starting next week and the Big Cocks and Broomsticks Blog Hop starting in October. There are lots more prizes to win!

Finally, the weekend was a blast. Sort of. Wrote 8200 words on my big project on Saturday, drank more coffee than I should have and then nearly had a heart attack during the Saints game. I should’ve known it was going to be bad when I developed a horrible case of heart burn earlier yesterday that didn’t go away. Nope. It just got worse as the game progressed until I swore I was going to die by the last 5 seconds of the game. I survived though, so obviously I’m in decent health.

Bless you boys! You never allow us to have a dull game.

What did you do this weekend?