It’s a brand new year…did I do a fantasy man Friday this year? *ponder* Ah yes! Caveman David. Rowr. Hubba, hubba. I did miss last week though. I was working out different angles trying to find a man for y’all. Honest.

And I found one with the help of the first Caveman I interviewed and a really awesome guy, Justin. Today’s hunk is none other than a former Caveman, Kelii. Please give this exotic hunk your attention. *bats her eyelashes*

Danica: How did you become a cover model?
Kelii: I was asked through a friend who had done a few covers.
Danica: Did you have fun with it?
Kelii: It was interesting. It was the first time I had done anything like that. I had done a few fitness magazines, but not a book cover.

Danica: Are you still modeling? What are you doing now?
Kelii: No, I haven’t been a cover model in awhile. I’m a personal trainer by day, stripper by night.
Danica: How is that?
Kelii: It’s two totally different worlds for sure.

Danica: How is it being the focus of that much female attention?
Kelii: When you’re having a bad day, it’s definitely a pick me up. Whenever you walk through those doors, whatever problems you have going on, you’re not going to show it and you forget about it all. You forget about all the stress you have during the day because your job is to make other people have a good time.

Danica: Did you ever read one of the books you’ve been a cover model for?
Kelii:  Yeah! I read Altered States.  I thought it was pretty good. It was interesting how they matched the character on the cover of the book to the character in the book. It was weird, almost as though I was reading about myself.

Danica: What’s the one place in the world you’d love to visit and why?
Kelii: As I’m getting older, I watch the History Channel a lot so I appreciate things like that more. I like to visit China, being part Chinese. I’d like to see where her side of the family came from. I’m Hawaiian and Chinese, I’d like to see more of the Asian side of the family.

Danica: What do you have going on right now? Do you have any upcoming appearances? If so, when, where and will there be video? Just joking about that last one. Sort of. Ahem.
Kelii: Dancing at LaBare’s Houston. Three-four nights a week. Wednesday through Saturday.

Danica: How many hours do you spend in the gym? For yourself, not your clients. (I was blushing at this goof.)
Kelii: I’m only there about an hour to hour and a half about six times a week.

Danica: What do you think is your best feature?
Kelii: I’d have to say my smile.

Danica: Are you a breast or a butt man?
Kelii: I’m a breast man. That gets me going.
Danica: I have to say you’re probably the first of the men I’ve interviewed to say that.
Kelii: Really? Funny, but yeah, I like boobs.

Danica: What’s the craziest thing you’ve ever done as a model/dancer?
Kelii: I did an office party and it never happened to me in the 6 years I was dancing. It was an office birthday party. The lady I was dancing for had her own office. I was dancing for about five minutes with the door open and there wer e a couple of people inside. Next thing I know the door was closed and my pant were down. And my penis was in her mouth
Danica: I was blushing the entire time, y’all, but I had to ask what he did next.
Kelii: After about a good 15 minutes I was finished and we are continuing our adventures as we speak.
Danica: Y’all can’t take this plotbunny away from me. Don’t be surprised if there’s a book based off of this…just sayin’.

Danica: Do you prefer winter or summer?
Kelii: Winter because when it’s hot, you can only go down to your skin and you’d still be hot.
Danica: Amen!

Danica: What’s one movie you can watch over and over?
Kelii: The Hangover
Danica: Or as my mom calls it “The Alcoholics”

Danica: Do you prefer mountains or beaches?
Kelii: Beaches

Danica: Boxers, briefs, commando?
Kelii: Briefs. I like how it holds my junk together.

Danica: Is there anything about yourself you feel enough people don’t know? Kelii: I’m always smiling, always happy and courteous. But no one really knows I’m a secret sex fiend. 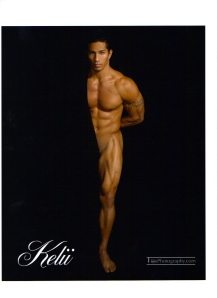 Um…wh-what? Y’all are actually paying attention here? Shouldn’t you be, I don’t know, licking the screen and babbling incoherently? What do y’all think of Kelii?