I know, it’s been several days since you’ve heard from me. In fact, if you actually want to hear my voice, you’re so out of luck. Nationals destroyed my voice and I sound like I have a secret to share with everyone. I don’t. Not really.

Nationals was fun. No doubt about it. I met so many new, wonderful people and was able to meet up with people I met last year. I didn’t grab the wrong bag at the airport this year, but I did almost get on a first-name basis with the security guards at the hotel. No, not in that way. I sort of locked myself out the hotel room safe, then two days later had a door that wouldn’t lock. They were very nice, by the way. 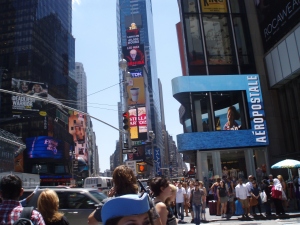 I wish I could talk about everything that happened, but that would mean this post would be about five pages long. Hence the reason I still have the non-existent voice: I keep having to re-tell my conference stories to relatives who stop by. I actually saw one of my critique partners do a top 10 list, so I think I’ll follow in her steps. Ready?

10 of the best things that happened at Nationals (in no particular order):

– I saw gorgeous men (there were a couple of cover models there. More on that later).
– The food (when I ate) was excellent.
– I finally met my critique partner, Daisy Harris, in person and she’s just adorable.
– I also met my agent, Nalini Akolekar, in person and she’s wonderful and thinks I’m a bizarre woman. It’s a good thing, trust me.
– The hotel was beautiful.
– Jillian Chantal took mercy on me and walked with me through Times Square because I was afraid someone would whisk me away (and no, it wouldn’t have been Gerard Butler).
– I had a lot of fun people watching.
– The Gathering (FF&P party) was a lot of fun with great food.
– I had drinks with several up and coming Avon authors with books out, or just about to come out. They were a lot of fun.
– I met my publisher and several Siren authors for drinks. A wonderful time was had by all.

10 things not so great about Nationals (in no particular order):
– I stubbed my toe in the women’s bathroom and had to beg a band-aid off of someone to stop the bleeding.
– I was locked out of my safe and then couldn’t lock my hotel room door. Thank God for security men.
– The elevators were completely whack.
– The shower was one of those “gentle rain” type shower heads when I really needed to have the hot water beat me half to death every morning.
– Starbucks closed too early and were stingy with their chairs.
– The smoking area left a lot to be desired and I’m almost positive my butt will never gain back it’s normal shape.
– New York shuttle drivers are insane and should probably not have licenses. In fact, it might be better for the entire city to be closed off to vehicles for the safety of tourists with heart conditions.
– Chicken is a four-letter word now and I never want to eat it again.
– Could someone please tell me why they don’t turn the a/c units on “arctic” when there’s a book signing with over 500 authors? Anyone?
– Internet charges should never be that much at a hotel like that.

So, that’s what I got out of Nationals. If you haven’t been, you should definitely go. Of course, now I’m debating on whether I’ll be going to Anaheim next year for Nationals or Chicago for RT. I’m thinking RT might be a wild ride. What do you think?