I was going to post a video, but I have too much other stuff to post and wouldn’t want to kill y’all computers. So 500 posts…what have I learned in 500 blog posts? I’ve learned that I’m a pervert, but luckily, I’m not the only one. Oh yes, there are at least 13,000 other perverts out there who like to look at gorgeous men wearing barely anything.

Last week I asked y’all what I should post today in celebration. I thought Charlie 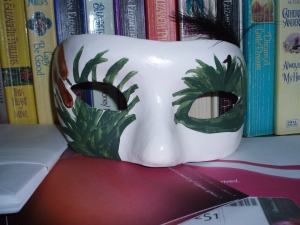 Sheen, but that was shot down. Instead, I’ll be posting the top 10 Fantasy Men of all time. (So far…because there is no way I’m going to stop Fantasy Man Friday.) I’ll also be giving away a specially painted Mardi Gras mask to one lucky person, so I hope y’all are ready for this.

Turn off the lights and put on your favorite make-out songs because you will be kissing your monitor.

*fans herself* Wow. These men…are just…wow. I was surprised a few didn’t make the cut, but that just means I have to make another slide show later on, bwahaha!

So which was your favorite? Do you even have a favorite? I don’t…not really because I want them all!

Leave a comment and you’ll be entered to win the specialty Mardi Gras mask! Thank you all for being on this crazy journey with me! You’re the best.

I’ll be posting my Memorial Day dedication on Wednesday over at my group blog, Four Foxes One Hound, but I would like to thank all the men and women who have given their lives for this country. You honor us all.